How Does the Electric Motor Work? by Pat Swanson

tips
Posted by: aschillinger@baldwinsupply.com on 3/24/2021

The purpose of this article will be to explain how a motor works in concise terms. In short, an electric motor “simply” converts electrical energy into mechanical energy.
The electric motor is literally everywhere. From the small fans you hear humming away in your computer to the door opener in your garage, to the heating system in your house, there are dozens of items that we rely on every day utilizing the electric motor. Historically, they played an integral role turning the machines that allowed for the industrial revolution. As they become smaller and more efficient, along with battery technology, we‘ll continue to see them replace the internal combustion engine. According to the U.S. Department of Energy, 62.6% of the industrial electric power in the U.S. is consumed by electric motors.
So how the hell do they work, you’re asking…
We all understand how magnets work, right? Magnets have a positive and negative pole. Like-poles repel each other and opposite-poles attract each other. The forces of the like-poles is what creates the movement in an electric motor. 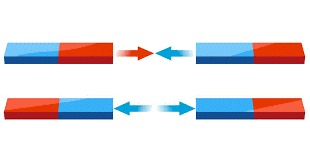 There is a relationship between electricity, magnetism and movement. (A) When current travels through an electric wire, it creates a magnetic field all around it. (B) When you loop the wire you create a small electromagnet… notice the polarization taking place similar to the traditional magnet mentioned above, a defined North and South Pole. (C) In 1820 Oersted Sturgeon found that when you wrap wire around an iron core you intensify the strength of this magnetic field.

Now that we understand the basic behavior of magnetic fields and how electricity can create them let’s look at how this technology was used to develop the electric motor.

This is what the stator of a 3 phase AC induction motor looks like. The Red, Yellow and Blue coils represent the three separate phases that come from the industrial power grid.
Think about each of these loops as their own independent electromagnet. 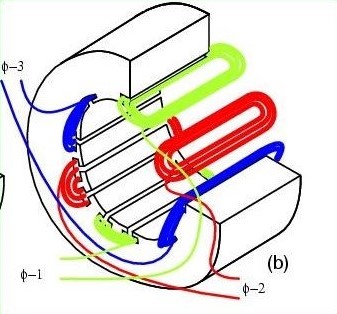 Modern industrial power consists of 3 separate phases all with identical sine waves, each of the 3 waves are shifted 120 degrees apart from one another as shown below. As the separate phases cycle through their wave forms their electro magnets become energized at 3 different times creating a rotating magnetic field.

So what about the rotor… the mechanical part of the motor?
Induction motors have what is called a squirrel cage rotor. By looking at it below you can maybe see where it gets its name. It looks like a wheel that a rodent may run inside if it was hollow… which it is not.

The rotor consists of a steel core with Aluminum or Copper bars. Aluminum being the more economical choice over copper. The above left is an example of an Aluminum filled rotor…

Instead of fitting the rotor with individual bars the majority of induction motors below 500Hp utilize cast rotors. Molten aluminum or copper create the bars… you can see how these bars are formed in the cutaway below. The tabs protruding out either end act as fan blades that help equalize the internal temperature inside the motor. Add a shaft and now you have a motor rotating assembly. 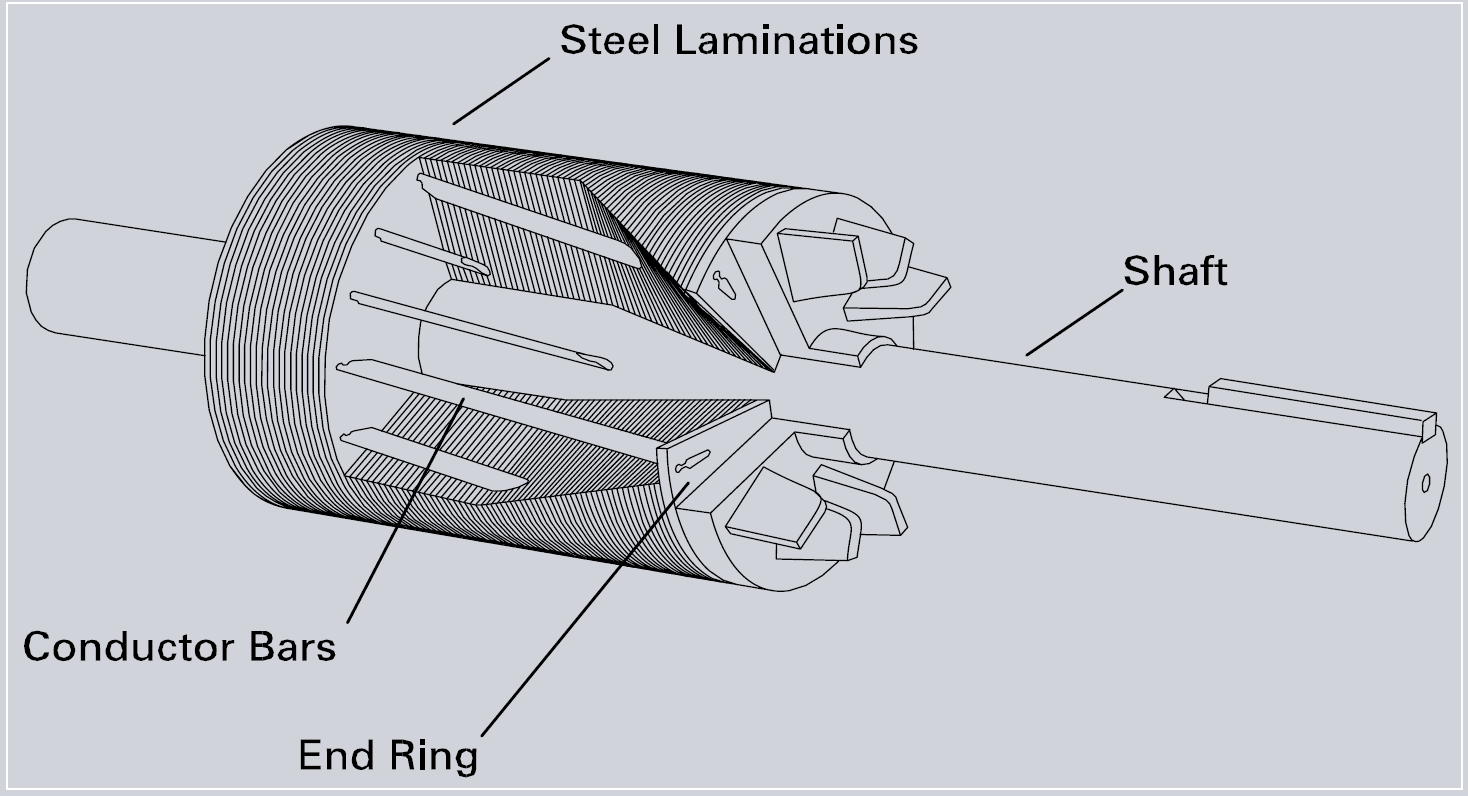 Let’s put this all together now… Insert the Rotating assembling into the stator. 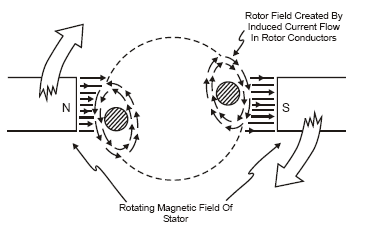